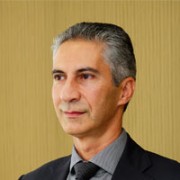 Mr. PetrosTheodotou is the founder and managing director of ServPRO

He attended a number of seminars, conferences and training courses relating to the accountancy profession, taxation, finance, management, human resource and quality.

He started his career in 1984 as an Accountant at NCR Middle East headquarters in Nicosia and soon after progressed to a Senior Accountant and Supervisor. Upon completing his studies in 1990 he joined Deloitte &Touche in Nicosia as an Audit Senior and later Audit Supervisor and held this position until December 1992. In 1993 he setup, as a co-founder and partner, the audit firm Papakyriacou, Theodotou& Co and later in 1998 continued his practice firm as a Certified Public Accountant. In 2000 he moved to the IT industry as a Director of Finance & Administration of NetU group, one of the leading IT companies in Cyprus and the Eastern Mediterranean region.