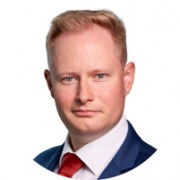 Nickolas Likhachov is an expert in banking area, he provides professional legal advice on M&A, banking and finance related matters as well as on insolvency and debt restructuring issues and cross-border assets tracing.

During his career Mr. Likhachov supported more than ten M&A international transactions of Ukrainian banks and corporations. He has significant experience in restructuring and realization of distressed debts and assets, asset-backed loans and general project finance. Nickolas has experience in representing the debtors as well as the creditors.

Nicholas was recognized by IFLR 2017 for restructuring debts transactions, performed by his team.