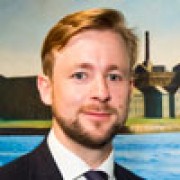 Guy Vesey is the Managing Director of Christie’s Russia. In this role, Mr. Vesey focuses on Christie’s Client Program in Russia & CIS, introduces the full range of Christie’s services to our Russian clients, engages with the Russian institutional community and continues to develop Christie’s educational program.

Guy Vesey joined Christie’s in 2012 from Dubai where he has been based since 2010, and where he has been responsible for overseeing two sale seasons a year and building client relationships for another art business. Prior to his move to the Middle East, Guy Vesey set up a Moscow based Art consultancy in association with Simon C. Dickinson Ltd. from London. Guy has a MA Hons. in History of Art from St. Andrews University and is currently studying the Russian language at the Moscow State University. He previously joined the Saifi Institute in Beirut, Lebanon where he studied Arabic.

Guy has a particular interest in photography. A keen musician, he plays the trumpet and was for three years at the Royal Academy of Music, London. He returns to live in Moscow having developed close ties with the city in his previous role as an art consultant.

Christie’s established a permanent presence in Russia 20 years ago. The prime function of the Moscow office and it’s team, led by Guy Vesey, is to act as a gateway into the international art market and the world of Christie’s, facilitating access to Christie’s 12 international sale locations, its 450 annual auctions, it’s unparalleled client service programme, as well as making awareness of Christie’s diversified businesses such as Christie’s Private sale services, Christie’s International Realty,Christie’s Education and CFASS, Christie’s secure storage facility.