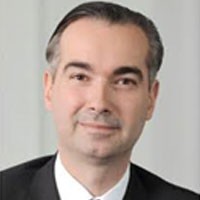 Ariel Sergio Goekmen is a member of the executive board of Schroder & Co Bank AG, Switzerland and is in charge of the private client operations in Zurich.  Here he manages teams looking after clients from Switzerland and Germany, as well as UK res non-doms, and those of Russian speaking Eastern Europe, and Nordic origin.

In his 30-plus year career, Ariel has held managerial positions at several banks in Switzerland and Liechtenstein. His focus is mainly on UHNW families and entrepreneurs, with the aim of mitigating risks and optimizing results in all areas of wealth management and related areas such as succession and estate planning as well as relocation, together with competent external specialists.

‎Ariel is a regular speaker and moderator at conferences and on specialist panels. He writes articles and has contributed to a number of books on wealth management topics.