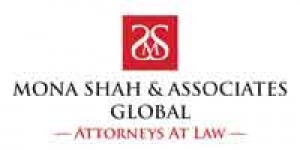 Established in 1997 and headquartered in Manhattan, New York, Mona Shah & Associates (MSA) is a Law Firm with an advanced Immigration practice, also specializing in direct investments, Corporate & Securities. MSA is internationally licensed to practice law in the US, the UK and China.

MSA is a recognized leader in the industry, highly regarded in the EB-5 immigrant investor field, assisting numerous investors, EB-5 projects, Regional Centers (RCs) and lawyers in navigating this complex, nuanced, and constantly changing area of law. MSA have extensive experience in financing, formulating & strategizing projects and investments, as well as administering compliance. MSA have marketed overseas for multiple projects raising millions of dollars in investor capital.  MSA lawyers have many accolades and awards including being voted in the top 25 attorneys in the US, they have been interviewed and quoted by mainstream newspapers, including the New York Times, mainstream TV channels (Al Jazeera, Fox Business News); they have published books, written and spoken extensively on US Immigration law both in the US and overseas. The firm produce their own podcast series. Ms. Shah is also an adjunct professor at Baruch College, City of New York where she teaches EB-5.