Malta – an island nation in the middle of the Mediterranean 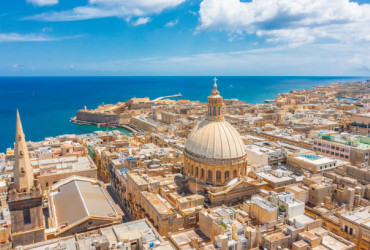 Malta, with its capital city Valletta, is an archipelago in the Mediterranean Sea, located 80 kilometres south of Italy with a surface area of just 316 square kilometres. About 475,000 people live in Malta and Gozo.

Malta has a chequered history. Its strategic location between Europe, Africa and the East attracted power struggles from foreign shores since ancient times. Rulers of the Islands included the Phoenicians, Carthaginians, Romans, Greeks, Byzantines, Arabs, Normans, Sicilians, Spanish, the Knights of St John, and the French. Malta became a British colony in 1815, an independent state in 1964 and a republic in 1974. Malta is a member of the Commonwealth of Nations and the United Nations. It joined the European Union in 2004, became part of the Schengen Area in 2007 and part of the eurozone in 2008.

Malta’s intricate history contributed greatly to the rich culture the Island and its population enjoys today. With its impressive number of churches with ornate interiors, its baroque architecture, its neolithic and megalithic temples, some of which are the oldest free-standing structures in the world, Malta and Gozo offer residents and visitors numerous opportunities for experiencing its historical legacy.

Beyond its history, Malta is a forward-looking nation and its modern, cosmopolitan lifestyle reflects the economic boom the country is experiencing, welcoming expatriates to its shores and embracing diversity.

Malta is the perfect place for residents to live safely and securely, among a local population with a reputation of being friendly and hospitable. Cost of living is moderate and its small size makes distances negligible. The family is still a very close-knit unit in Malta, with grandparents willingly taking the role of grandchild carers.

Malta boasts educational institutions of the highest standards. With a 400-year history, the University of Malta is a centre for international academic exchange. With 12 faculties and a number of other institutes and centres, the University undertakes academic research, designs courses in the arts, sciences and the humanities to produce professionals in various disciplines, and bridges education with industry needs.

A number of business schools also operate in Malta. These manage reputable programmes offered by international schools and universities and offer students course of studies such as MBAs and specialised IT degrees. Malta is also a hub for the learning of English as a foreign language. Around 40 language schools contribute to Malta’s niche tourism industry, servicing over 87,000 students in 2016.

Maltese residents enjoy excellent quality medical care and are served by both public and private hospitals and a network of strategically located government health centres and private clinics.

Malta is a democratic state and enjoys a stable government. As one of the smallest countries in the European Union, it punches well above its weight by being among the fastest growing economies from among member states. Malta consistently registers high ratings from the major credit rating agencies, while unemployment percentages are amongst the lowest in Europe.

The government employs open-for-business policies that welcome the latest industry developments, while ensuring consumer protection and market stability. Foreign companies relocating their businesses to Malta, or opening start-ups, can access a number of government-run initiatives, intended to attract direct foreign investment to the Islands’ shores. Business can be conducted in English and entrepreneurs will find a strong infrastructure and a talented, professional and skilled workforce in Malta.

Robust industry sectors that contribute to the country’s GDP include the financial services, gaming, aviation, maritime, pharma, manufacturing, and tourism among others. Malta is one of the very first countries in the world to regulate for the development of blockchain and cryptocurrencies. Recognising that fintech and regtech need to be embraced if Malta’s business eco-system is to keep thriving in the future, the government has been pro-active in engaging with some of the largest global players in the field.

The MPRP is a straightforward residency-by-investment programme based on investments in property and government contributions. With the promise of a 4 to 6-month processing time from the submission of a complete and correct application, the Programme offers much value to individuals and families wishing to make Malta their home away from home.

To be eligible for the MPRP, applicants should:

To participate in the Programme, applicants must: