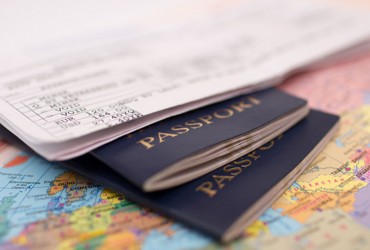 The global economic crisis, which hit Europe 2008, affected real estate markets across the continent. Since then, certain countries have tried to stimulate their economies and increase investment flows using golden visa programmes, through which authorities grant citizenship and residency for buying real estate.

In this article, Tranio analysts look at how the real estate market in five European countries – Latvia, Portugal, Spain, Cyprus and Greece – has developed.

The Latvian economy recovered from the crisis relatively quickly with the support of the International Monetary Fund (IMF). On 2009, Latvia’s GDP shrank by almost 15%, but it has been growing steadily since 2011.

Latvia launched its golden visa programme in April 2010. Its low investment threshold (€140,000 for Riga and €70,000 for other regions) guaranteed instant popularity. According to the country’s Office of Citizenship and Migration Affairs, golden visas were granted to 1,300 property buyers and their family members in 2011; 2,200 in 2012; 3,100 in 2013 and almost 5,000 property buyers in 2014. However, in September 2014, the Latvian government raised the investment threshold to €250,000, which caused the demand for golden visas to fall dramatically. In 2016, only 489 property buyers obtained Latvian residency. About 70% of the investors who obtained Latvian residency were Russian investors.

Residential property prices in Latvia collapsed immediately as a result of the crisis. According to Eurostat, from early 2008 to 2010, the price per square metre fell by half. However, the launch of the golden visa programme saw property prices growing rapidly until the increase in the investment threshold. Prices grew by 40% to Q3 2014, but quickly fell following the announcement. Prices stabilised over time, and by Q2 2017 the price per square metre in Latvia was 14% higher than during the period of growth in 2014. 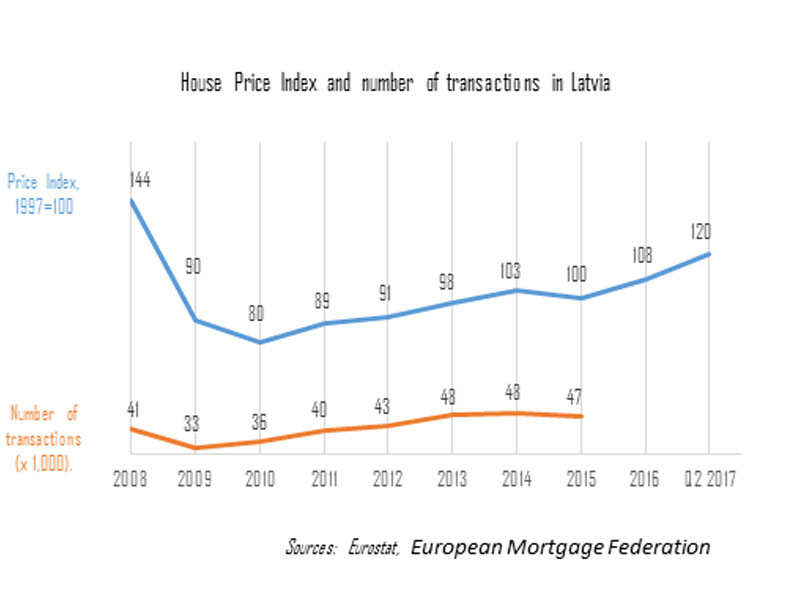 According to the European Mortgage Federation, the programme had a similar effect on the number of real estate transactions, which had been increasing since 2010. In 2014, it  stopped growing and in 2015, the number of transactions fell by 3%. There is no official data for 2016 and 2017 yet.

The golden visa programme has had a significant effect on the Latvian real estate market, having guaranteed over 4% of sales in 2014 – a record year for residence permits issued. However, the investment threshold increase caused the number of applicants to shrink rapidly (there were 10 times fewer applications in 2016 than 2014), weakening the significance of the programme.

In October 2012, the Portuguese government announced a residence-for-investment programme. One of the investment options (the most popular among the applicants with 95% of the issued residence permits) was to purchase property above €500,000. In the third year of the programme, the number of investors started to decline, and Portugal reduced the investment threshold for certain categories of real estate. The minimum investment was reduced to €350,000 for properties built more than 30 years ago or located in areas of urban renovation, and to €400,000 for properties in low population density areas. This measure stimulated demand, and the number of applicants in 2016 doubled compared to 2015. Until July 2017, a total of 5,243 residence permits have been issued, with 4,945 of them for real estate investment.

Real estate prices fell from 2010 to mid-2013. Six months after the launch of the golden visa programme, property prices started growing. Between Q2 2013 and Q2 2017, prices grew by almost 20%, while the investment threshold reduction did nothing but strengthen this growth, Residential property prices grew by an average of 3% before the change, and by 6% after.

Generally, the growth of Portugal’s real estate market has been driven by a number of factors: the recovery of the local economy, Lisbon’s growing status as a European hub, and a rapid growth in the number of tourists. At the same time, the golden visa programme, which covers only 1% of property transactions, is stimulating international investor interest in the local market.

Spain launched its residence-for-investment programme in September 2013. In 2015, authorities expanded the list of persons eligible for residence along with the main applicant, and prolonged the visa validity period from two to five years. Real estate purchase is only one of the investment options, and was chosen by 2,097 applicants (72% of the total) over the three years since the programme was introduced. According to Spanish daily El País, two-thirds of property investors are from China (702) and Russia (640).

As of Q3 2017, residential property prices in Spain were 40% below its 2007 peak. According to Fotocasa, the average price per square metre fell from €2,862 to €1,716 in the past decade. According to Eurostat, prices bottomed out in early 2014, several months after the launch of the golden visa programme. However, prices started climbing again as early as in Q2 2014, and since then the average quarterly growth has exceeded 3% year-on-year. 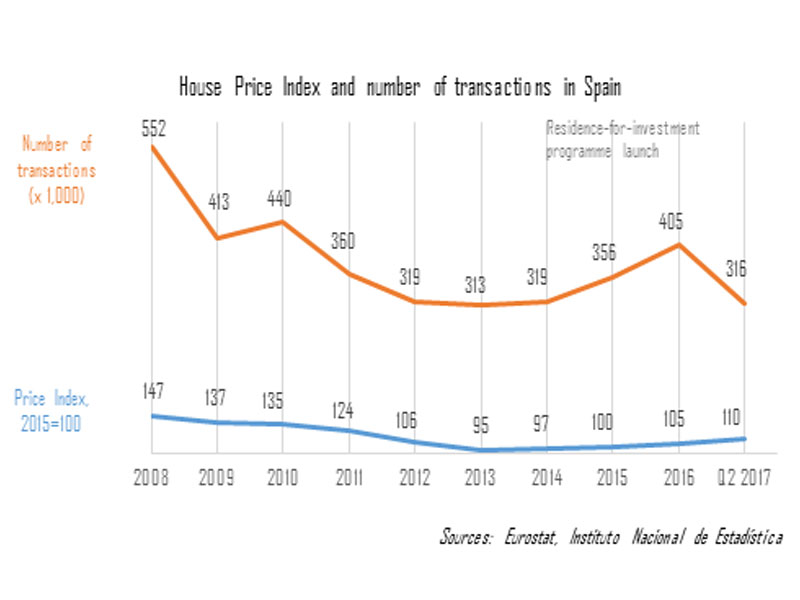 Despite the success of the Spanish programme, it should be noted that the number of golden visas it granted compared to the total number of real estate transactions is insignificant (about 0.1%). The main incentives for buying property in Spain are low mortgage rates, the climate (for those who buy property for their own use) and the country’s popularity among tourists (for those who plan on leasing their property).

In Barcelona, which accounts for almost a half (43%) of the residence permits issued, the programme’s influence is more significant. Taking into account that between 2013 and 2016 almost 42,000 transactions involving residential property were closed in Barcelona, and over 6,000 of them were registered to international investors, residence seekers account for about 15% of foreign buyers there.

The Cypriot economy is actively recovering. The country’s GDP has been growing for the third consecutive year – in Q2 2017, year-on-year growth reached 3.6%.

Cyprus launched its residence-for-investment programme in March 2014. Under one of its conditions, investors only have to put €2 million in real estate to be eligible for citizenship. According to many investors, one of the main advantages of the Cypriot programme is the short time frame n – applicants can obtain citizenship as early as several months after closing the transaction. According to Bloomberg, since the launch programme to May 2017, over 2,000 golden visas have been issued – half of them to Russians.

According to Eurostat, in Q2 2017, property prices in Cyprus were 21% lower compared to pre-crisis levels. Prices stopped falling in early 2014, and the price per square metre has been constantly fluctuating since then. 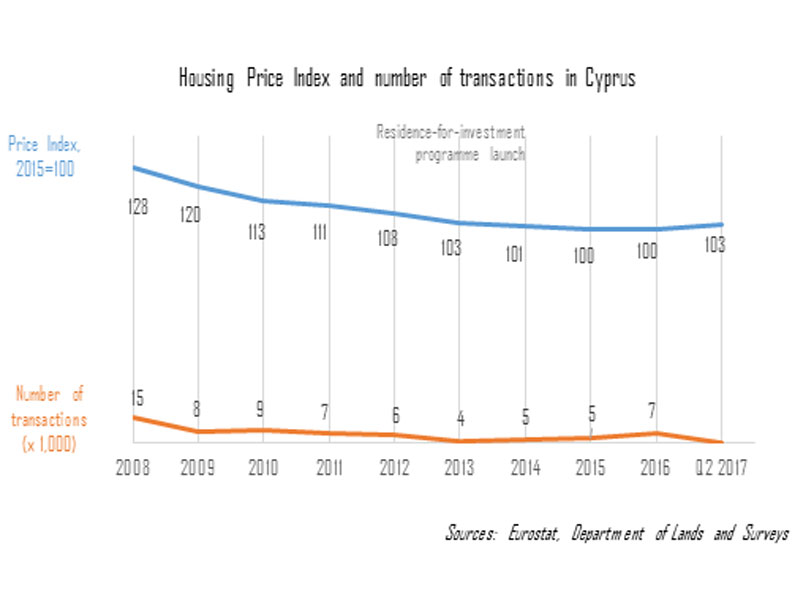 An important feature of the Cypriot programme is its significance to the country’s relatively small property market. According to official data, between early 2014 and May 2017, just over 19,000 property transactions were closed in Cyprus, with about 27% to foreign buyers. Even taking into account that some of the 2,000 golden visas mentioned by Bloomberg were issued for other types of investment allowed by the programme, its influence on the local property market is still significant.

Greece is among the few European economies that have not recovered from the 2008 financial crisis. However, its economy is getting back on track, and the International Monetary Fund expects the country’s GDP to grow in 2017.

Greece launched its residence-for-investment programme in summer of 2013. Under its terms, investors buying at least €250,000 of real estate are eligible for residence. According to Greek Travel Pages, between launch of the programme and October 2017, Greece granted 2,014 golden visas to investors, 464 of which in 2017.

According to official data, in Q2 2017, the average price per square metre in Greece was 43% lower compared to its peak in Q3 2008. The programme did not affect price dynamics significantly. The decline in property prices is now slowing down – according to the Bank of Greece, in 2016, prices fell by 1.8%, which is 3.5 percentage points lower than the year before. According to more optimistic estimates by the Global Property Guide, it grew by 0.15%. Trading Economics forecasts that prices for property in Greece will grow by an average of 22% between 2016 and 2020. 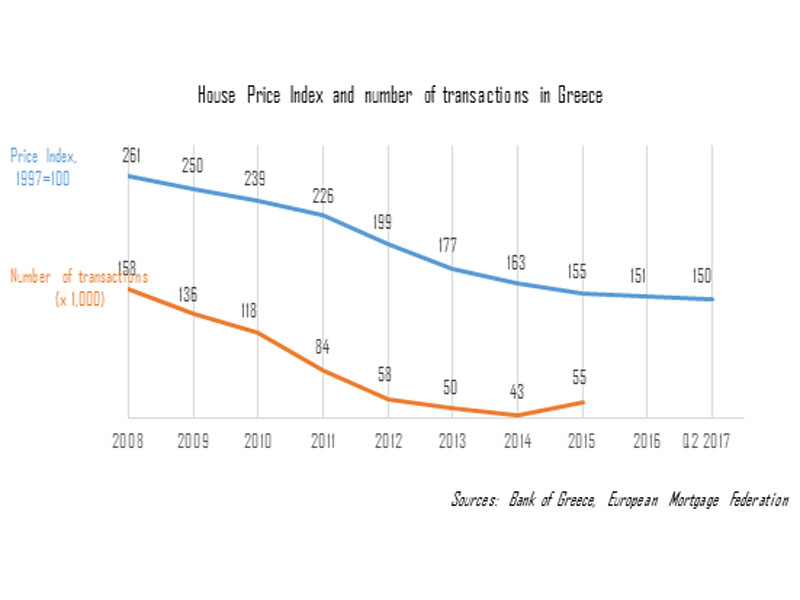 According to the European Mortgage Federation, the number of transactions involving residential property started shrinking in 2006. In 2014, 43,400 transactions were registered, which was almost four times less than in 2008. However, in 2015, this number grew by 25.8%. There is no data for 2016 and 2017 yet.

Today, golden visas account for only 1% of Greek property transactions. However, the gradual recovery of the economy, the growing number of tourists, and low property prices are attracting more international investors who want to obtain European residence in the near future.

Tranio.com is an international overseas property broker with a network of 700 partners worldwide and a catalogue of more than 110,000 listings in 65 countries. The company publishes daily news, high quality analysis on foreign realty, expert advice, and notes on laws and procedures related to buying and leasing properties abroad so that readers can make their property decisions with confidence.