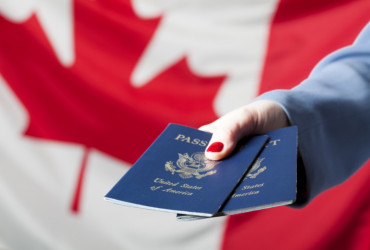 The North American country attracts foreigners with its stable economy, developed democracy, high level of education and medicine. Foreigners make up one-fifth of the total population of the country. Canada is the second largest country in the world by area, but is populated by 38 million people. The state is washed by the Pacific, Atlantic and Arctic oceans and has the longest coastline. Canada is a multicultural state with two official languages - French and English. The Canadian economy is multi-sectoral. Canada is considered one of the richest countries in the world. It is a member of the OECD and G7. The most important sectors are oil industry, logging and raw materials. Also, the country is a major supplier of agricultural products and one of the leading countries in the world in terms of trade. Let's take a closer look at the ways of obtaining Canadian citizenship.

Benefits of Canadian citizenship
A holder of citizenship status in Canada receives the following benefits:​

The principal applicant and family members are eligible to apply for Canadian citizenship by making an investment. Children over the age of majority apply and invest themselves. Citizenship status can be transferred through inheritance. Parents of a spouse cannot be listed on the application. They are allowed to move to the country after the applicant has processed the status.

The investor applies for a residence permit. It is allowed to apply for a passport within five years after making the investment. After obtaining permanent residence status, the applicant is obliged to live in the country for three years. Stay in the country must be at least 183 days per year. With permanent residency status, the investor receives the same rights as citizens of the state, but without the right to participate in elections. Also, the applicant has no right to work in the public sector. Since 2014, the citizenship by investment program worked only in the French-speaking region of Quebec. Once an investor receives permanent residency status in Quebec, he or she can reside and work in any region. Currently, the Citizenship by Investment Canada program has been suspended until 2023. However, there is no exact information on the extension of the program yet. The main reason for suspending the program is that applicants used it as a buffer to move to other Canadian regions.

Basic requirements for obtaining Canadian citizenship by making an investment

The main criterion for citizenship status is an investment of $900,000 in the economic development of the state. According to the requirements, the applicant does not need to open a business in the state. At the end of the five-year period, the investment can be returned. The annual quota for investors is 1,900 passports, 1,300 of which can only be issued to Chinese citizens. In addition to contributing money, the applicant must meet the following criteria:

Citizenship by investment in Canada should be chosen by people who want to immigrate to the country with their family for permanent residence. The program has no age limit, so it is also suitable for the elderly.

Additional opportunities for moving to Canada

There are several programs for entrepreneurs in the state. The program in Quebec, which ran until September 2021 and involves setting up a business project with a capital of $150,000 or more, has now been suspended. The owner of the company must own 25% of the shares and have at least two years of experience in a similar field. The other items are the same as the requirements for investors.

There is also a federal program for startups, which is popular in IT, biotech and pharmaceuticals. Under the terms, investments of $200,000 or more must be raised. The five founders and their family members can apply for the permanent residency status for a startup.

You can become a Canadian citizen by: