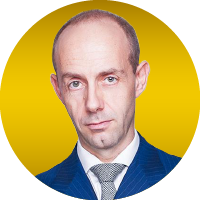 Giovanni Salvetti joined Rothschild in 2003. He has been Advisor to clients in the emerging markets since 1996. Giovanni has been Advisor on M&A, debt and equity projects in different sectors, particularly in the banking, consumer/agri, O&G, healthcare and industrial sector

Prior to joining Rothschild, Giovanni was a Partner of the M&A boutique Franco Bernabè & C. S.p.A., specialized in telecommunications, from 1999 to 2003

Giovanni graduated from Bocconi University (1996) and holds a Master in International Economy, from the Erasmus University of Rotterdam

Advisor to creditors of DTEK on DTEK’s debt restructuring (ongoing)

Advisor to bondholders and banks committees on US$ 1.1bn restructuring of Mriya in Ukraine (2018)

Advisor to Lenta on its US$ 1.0bn IPO on the London Stock Exchange and the Moscow Exchange (2014)

Advising Polpharma on acquisition of a majority stake in Khimpharm (2011)