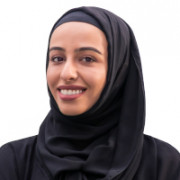 She currently oversees case progression at the DIFC Courts, as well as sitting as a judge and mediator with the Small Claims tribunal (SCT). Ayesha also hears applications in the Court of First Instance, Court of Appeal and the Enforcement Department. Ayesha also oversees the day-to-day function of the DIFC Courts Wills Service.

Ayesha holds a bachelor’s degree in Law and Political Science from University of Saint Joseph Dubai and studied there on a scholarship from the Edad Leadership Programme. She is also qualified to appear before the local and federal courts in the UAE.