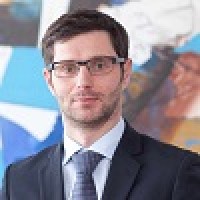 Rietumu Bank
Member of the Board

Since 2010 – vice-president, head of the Corporate Finance Department, since 2012 – Vice-president, head of the Lending and Investment Department. Renat Lokomet has extensive experience in business with clients of the Bank both in Latvia and abroad organizing and concluding large lending and investment deals.
Rietumu Bank is the leading privately-owned bank in Latvia specializing in corporate banking and wealth management. The main customers of the bank are companies actively involved in international labor and trade, with the business areas of interest in Baltic countries and the CIS,
including Russia, Belarus, Ukraine, Kazakhstan, as well as ‘old Europe’, Asia and other regions.
Apart from headquarters in Riga, representative offices of the bank and its partners operate in Moscow, Saint Petersburg and many other Russian cities, as well as in Kiev, Minsk, Almaty, Baku, Erevan, Bucharest, Paris and Shanghai. Customers can manage their accounts remotely via the internet, including application for iPhone.
The service is provided in Russian, English, French, German, Latvian and Chinese. Rietumu Bank is one of few banks in the region that offers its customers trade financing opportunities, including freight transit via the Baltic ports. The bank also grants longterm loans for development of businesses in Baltics and CIS. Among other things for Russian entrepreneurs Rietumu Bank offers the organization of online business on a European company basis. Rietumu is one of the
unique banks in Latvia that has all the required European licenses for servicing card operations in the internet, and is a Visa and Master Card member.
Rietumu Bank provides full support to its customers with in obtaining a residence permit in Latvia. With the help of Rietumu Bank, this status has already been granted to more than 700 investors – about a third of the total number of foreign citizens who have received the residence permit in Latvia.
In 2013 a favorable tax regime for international holdings took effect in Latvia. According to the amendments, income from selling capital shares and stocks, any received dividends and their payment to other countries, etc. will not be taxable.

Rietumu Bank provides full support to its customers in registering and servicing such companies.