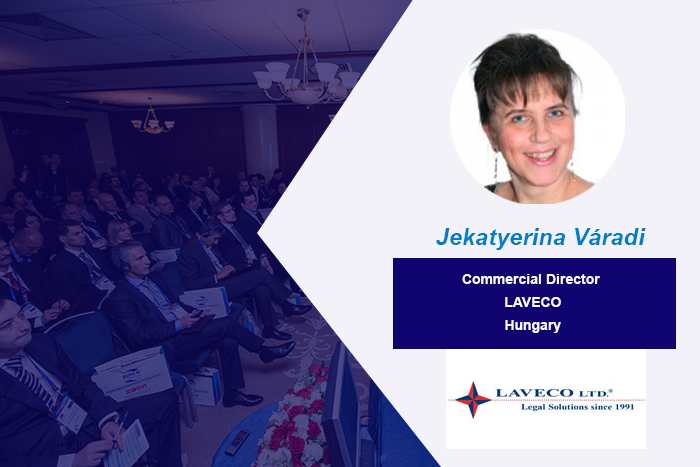 We present you one of the Speakers and Sponsors who will participate in the conference WealthPro Ukraine, Kiev, which will be held in the Fairmont Grand Hotel 5* on 02-03 March 2017.

Ekaterina Varadi is one of the founders and owners of the international LAVECO Group, established in Budapest, Hungary in 1991.

Since its formation, the LAVECO Group has been providing services in the area of company registration in different jurisdictions, including EU member states, Hong Kong, UAE, UK and the traditional offshore countries. LAVECO is also actively engaged in the opening of bank accounts for both companies and private invividuals, as well as providing legal, accounting and auditing services for the companies it registers, creating trusts, private foundations and other structures for the reduction of taxes and arranging second citizenship and permanent residence in various countries.

The LAVECO Group currently has its own offices in Hungary, Bulgaria, Hong Kong, Cyprus, the Seychelles and the United Arab Emirates. The local LAVECO companies in Cyprus and the Seychelles are licensed corporate service providers for the registration and administration of companies.

Among the special services provided by LAVECO are the creation and administration of companies in Hungary and Bulgaria, and the opening of bank accounts for local and foreign companies and individuals.

Ekaterina Varadi was born in Moscow, and from 1984 to 1989 studied at the Department of Philology of the Lomonosov Moscow State University, specialising  in Hungarian and German languages and graduating with a diploma with honours. In addition, she also attended English language courses at the Ministry of Foreign Affairs of the Russian Federation, passing with honours.

Ekaterina has been living in Hungary since 1990. She graduated from the Institute of Foreign Trade (1990 – 1993) with a diploma with honours.

In 1991, Ekaterina and her husband, László Váradi, founded the company LAVECO Ltd. in Budapest. She has been working as the company’s commercial director since its formation.

The LAVECO Group was founded 25 years ago, in 1991, in Budapest. The Group currently consists of 6 offices: Hungary, Bulgaria, Cyprus, Hong Kong, the Seychelles and the United Arab Emirates. The local LAVECO companies in Cyprus and the Seychelles are licensed corporate service providers (these activities are not subject to licenses in Hungary, Bulgaria and Hong Kong).

The formation and administration of offshore and resident companies in different countries, together with the opening of bank accounts and the provision of all related services have been the main activities of the company since it was first established. Today, when more and more restrictions are being placed on the use of offshore companies, the LAVECO Group of companies provides its clients with exclusive solutions, facilitating the reduction of taxes legally and without using offshore companies.

Services of the LAVECO Group: